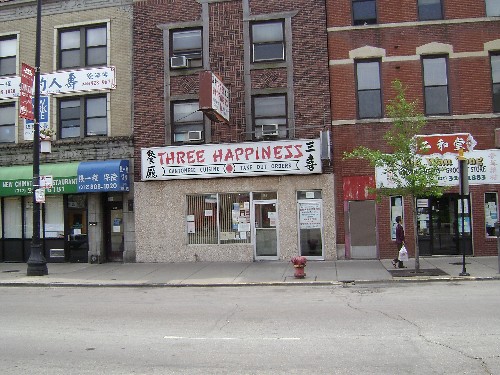 Regrettably, this generation has all but abandoned the Chinatown south of Cermak Road. Same quality food, with a clientele 30 years older. There are several factors: less street parking on Wentworth Avenue, for one. The more interesting reason is a cultural one, and it can be boiled down to font. You’re more likely to find Orientalized English letters here.

This may seem benign to non-Chinese, but that font — the choppy faux-brush-stroke found on takeout containers — represents an outdated, Charlie Chan view of the culture. You see those letters and expect to hear a gong. It’s a turnoff to younger Chinese, and as with all kids and their disposable incomes, they vote with their wallets.

There is a sign above the storefront at 209 W. Cermak Road bearing this Orientalized lettering. It belongs to Three Happiness restaurant, and is an artifact of how Chinese culture was Anglicized in the early-1970s. The dining room is a squat square box with newspaper clippings taped to walls. The tables are slightly sticky. The chandelier is less functional, more aspirational. Meanwhile, a block north in Chinatown Square, restaurants have flat-screen TVs embedded in the wall of every booth. To compete against this is to paddle upstream.

“You can always go to the fancy restaurants,” said Raymond Yau, a Three Happiness employee for 35 years and its owner/manager since 1995. “But smaller restaurants like us have to depend on the food. Older customers only care about good food.”

Here, the food is a solid, by-the-books take on Cantonese, the boldest and most crowd-pleasing of the regional Chinese cuisines. To summarize Cantonese cooking into a few sentences is a futile exercise, especially here with a menu that numbers in the triple digits. In essence, any animal from land, sea or air is stir-fried, deep-fried, steamed and dressed with everything from garlic black bean to ginger scallion sauce, accompanied with noodles or mostly rice, served family style.

Despite serving the same 200 dishes from the Chinatown restaurant playbook, Three Happiness has been singled out — thank longevity — as a model of reliability, a place that places food before window dressing. It has taken on the reputation of satisfying 4 a.m. urges for salt-and-pepper shrimp, because it’s a 24-hour operation. The local culinary message board LTHForum is named for “Little Three Happiness,” the “little” moniker given to this original location when a second, larger Three Happiness opened on Wentworth Avenue.

At 6 p.m. on a recent Friday, five Chinese women on staff were sitting in the dining room before the rush, chatting in Cantonese about the previous night’s thunderstorms. They understood English but were delighted to find a Hong Kong native among them. That’s when they open up. They didn’t need to gently ease us in with perfunctory subgum or sweet and sour whatever.

We asked for our waitress’s personal favorites, and said yes to all her suggestions. What followed was a dinner with no logical progression, just food arriving in the order it finished cooking. Satay beef came first, followed by salt-and-pepper batter-fried scallops, spicy Szechuan green beans, then the brittle crispy-skin chicken (with a side dish of MSG dipping salt), all served freakishly hot.

Those on strict low-sodium diets best stay away (and from all of Chinatown for that matter). Your mouth becomes cotton dry, your kidneys slightly weaker, but you leave the restaurant checking off all the boxes required of a Chinatown meal — filling, fast, inexpensive, seasoned, satisfying.

Of the 15 diners that night, I was the only Asian customer. This said so much.

“About two-thirds of my customers are not Chinese,” Yau later told me. “But they have great loyalty. And I’m proud this restaurant has survived until now.”

There are two Chinatowns in Chicago: one progressive, one set in its ways. It doesn’t mean one is better than the other, just that some exterior signage could use some design refreshment. Three Happiness won’t win the pageant on aesthetics, but it’ll be in the running for Miss Congeniality, defined in one dictionary as “pleasant because of a personality, qualities, or interests that are similar to one’s own.”

Type to search or hit ESC to close
See all results